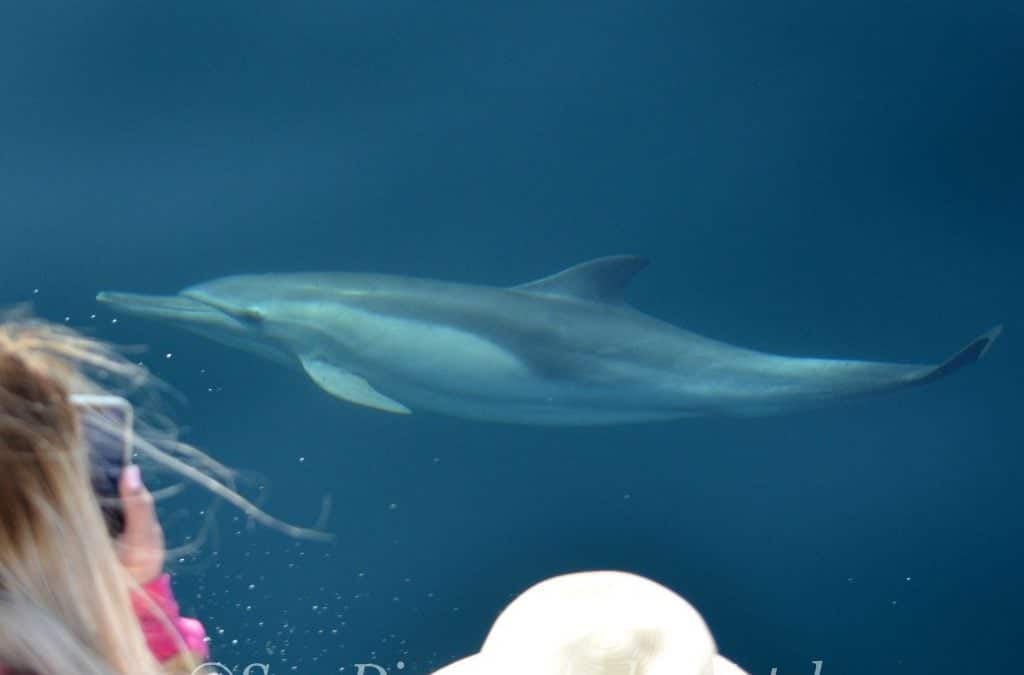 It was an awesome day on the Pacific! We had two great trips that caught up with three different types of toothed whales in all. During the morning trip, we started out with a pod of ~10 Pacific white-sided dolphins that were enjoying a feast! We observed them feeding on small schooling fish! We also sighted some Common dolphins that were very mellow. Many of the dolphins came over to check us out! We observed dolphins at the bow and beside us. We continued out to the west and got very lucky! We sighted a huge pod of ~500 Common dolphins! They were generally headed to the west and then changed their direction to the NW. They were traveling in a long line and it spanned almost 1-mile long! We continued back toward the coast and along the way a passenger sighted a spout! We waited for it to resurface, but didn’t get a chance to relocate it.
During the afternoon cruise, we were headed north, but sighted some bird activity to the SW. Among the diving birds, there were California sea lions and dolphins! We sighted both Common and Pacific white-sided dolphins all around us. There were two distinct bait balls that the wildlife was chasing after. It was exciting to see all the commotion. After a while they even took interest in us and began to bow-ride and surf in our wake! We observed some little calves in the pod that were traveling with their mothers. In all the activity a Harbor seal was sighted briefly before it went for a dive. We continued up the coast and a spout was sighted a mile up to the north in a spot with tons of birds around. The whale gave us a slip, as we didn’t see it surface again. We head out to the drop-off and traveled to the south, eventually making it back to Mission Bay. Overall, fantastic sights were seen as the visibility was incredible.
We hope you join us for another adventure on the Pacific!
-Vanessa