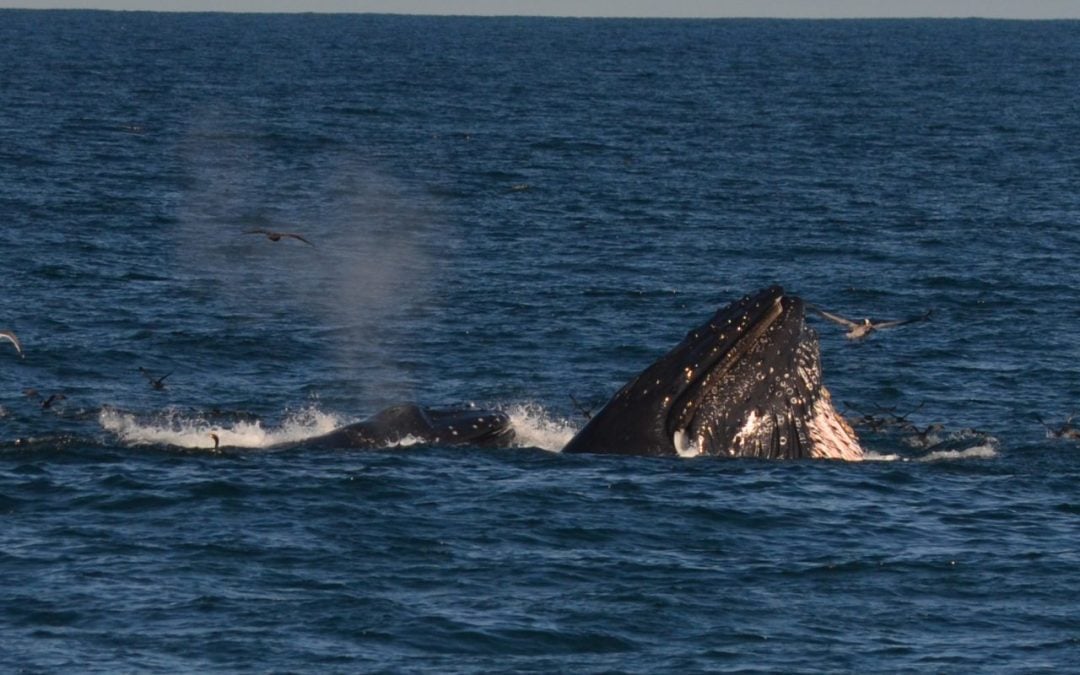 BEST. DAY. EVER!!! Lucky passengers embarked on one of our best trips of all time here at San Diego Whale Watch! We observed multiple baleen whales and toothed whales as they were within 5-miles from shore! In total, there were 21 Humpback whales (not including more spouts sighted in the distance), 3 Northbound Gray whales, ~1500+ Short-/Long-beaked Common dolphins, ~20 Pacific white-sided dolphins, 1 Inshore Bottlenose dolphin, ~30 California sea lions (rafting at the surface), and countless birds to include, foraging shearwaters, gulls, California Brown Pelicans, and Cormorants. Our first encounter included a pair of Humpback whales that we observed LUNGE-FEEDING on small schooling fish, likely anchovies! We observed huge bait balls near the surface, that all the wildlife was foraging on. Common dolphins, sea lions, and birds were all around also taking part in the feeding activity. Spouts of multiple whales were seen in the distance to the NW. We could see at least TEN spouts toward the horizon, appearing one right after the other, and also simultaneously! In the large aggregation were a pair of Gray whales that were exhibiting courtship behavior! They were seen rolling around, and swimming belly to belly. Flukes and pectoral flippers were raised, and at times they came up for breaths. We continued on for FOUR-MILES of non-stop wildlife. We bounced from Humpback to Humpback, with thousands of Common dolphins, sea lions, and birds all around. Today, we did not even reach the drop-off! One Humpback even dove underneath our boat and popped up right beside us, only 10-ft away! When about to turn around to head home, we sighted an energetic Humpback whale to the south that breached out of the water! We then observed as it pec-slapped, and continuously tail-lobbed at the surface!
It was an amazing experience and we hope you join us ASAP! You don’t want to miss it!
Trash/Recyclables: ZERO!!
-Vanessa