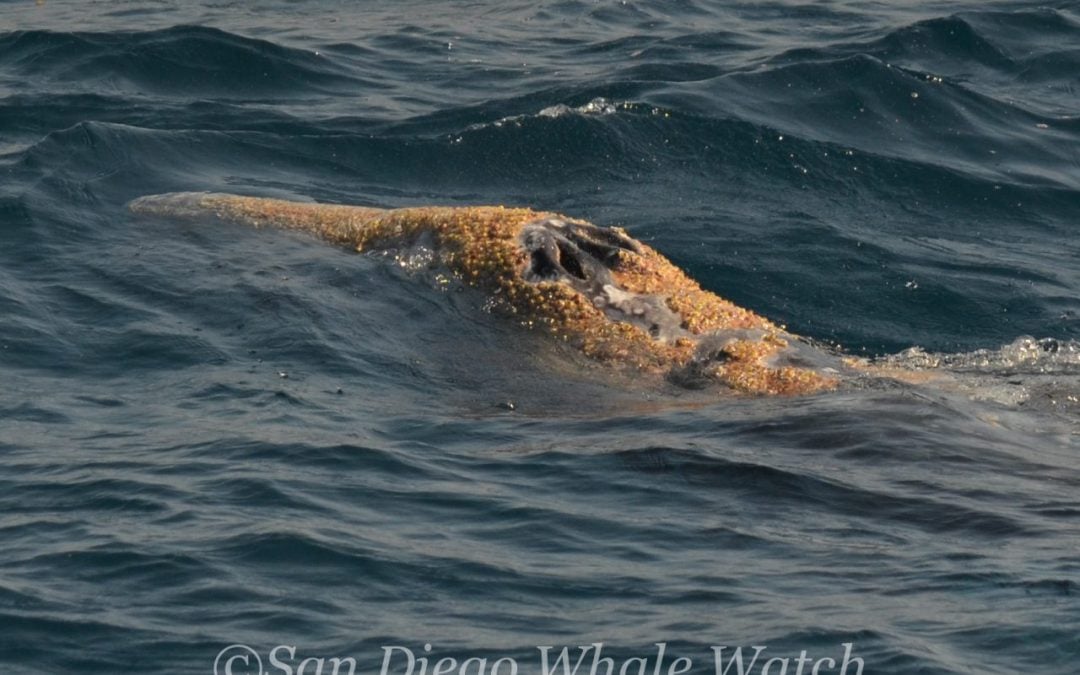 Gray whales were sighted on both trips today! During the morning trip, we sighted four Northbound Gray whales, and a trio of Inshore Bottlenose dolphins. One of the was a “friendly” Gray whale that came over to the boat to check us out! It swam within 10-ft from the Privateer. We could see it rolling around near the surface as well! We got some great looks at it barnacles and lice that was around its head. This mellow whale continued its journey to the north as we head west. We got out to a couple miles beyond the drop-off and sighted a Minke whale that was being elusive and was only sighted twice. We continued to the SE and found another trio of whales! On our way back into Mission Bay we sighted a raft of ~8 California sea lions that were thermoregulating.
During the afternoon, we had another fun trip that was full of wildlife. We had a dense fog bank that came rolling through and in the beginning of our trip, we only had about 100-ft of visibility. It cleared up and just in time for a northbound Gray whale. It surfaced for numerous breaths, which allowed us to see its barnacles and lice pretty clearly. We also got to see its flukes as it went for a deep dive! There were also a couple more spouts seen out in the distance to the north of us! We sighted a large pod of ~200 Common dolphins that were traveling fast to the south. We caught up with them and many surfed in our wake and bow-rode the Privateer. Cow/calf pairs were also seen around us. We heard their vocalizations as they were pretty chatty. The pod continued to get larger as we journeyed out to the SW and found more subgroups. While out there, we observed another northbound Gray whale that was exhibiting heart-shaped spouts!
Trash/Recyclables: FOUR Mylar balloons were successfully retrieved by our awesome deckhands, Dave and Jaeny!
Overall, it was a beautiful day, so we hope you join us on our next adventure on the Pacific.
-Vanessa