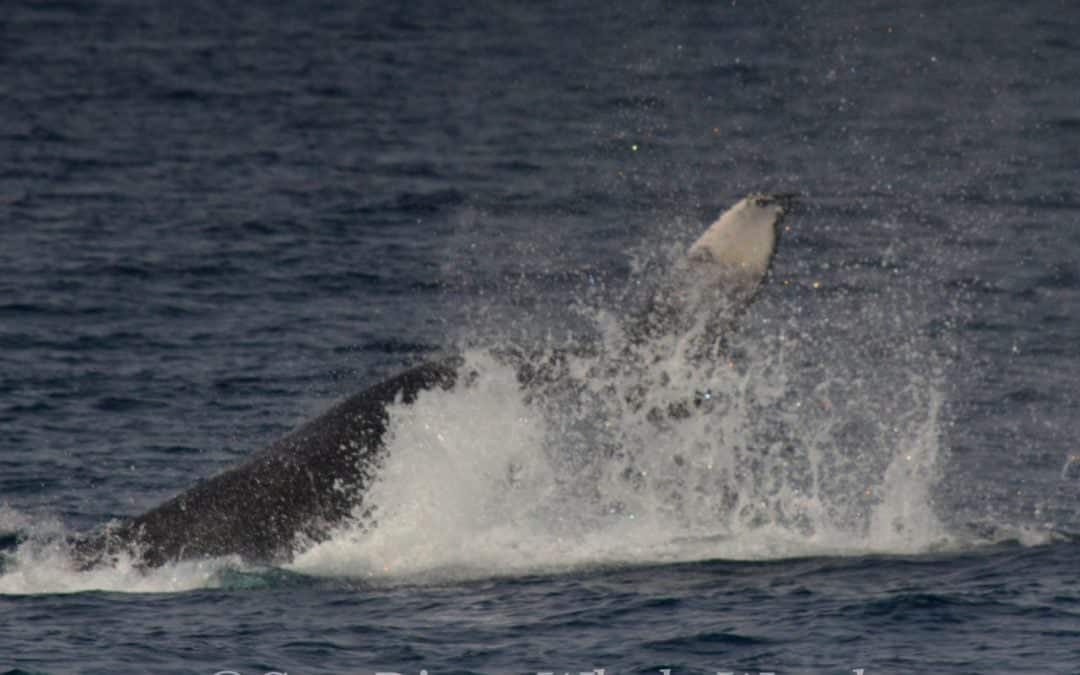 Hump-day came a day early! We sighted Humpback whales on both trips today! To start the day off, during the morning trip, sighted ~4 Inshore Bottlenose dolphins at the mouth of the jetties. Next, we encountered a feeding frenzy outside of O.B. There were a handful of Pacific white-sided dolphins feeding among lots of birds that were diving into the water. We continued to the SW and sighted Common dolphins that came over to check us out. Then up popped a whale! It surfaced and exhibited a spout. Two Humpback whales were in the area, traveling NW. There was also a bait ball nearby where Common dolphins and Humpback whales congregated. After awhile, we began to leave the pair of whales, and one individual BREACHED almost completely out of the water! No one got photos, unfortunately, but memories last a lifetime! Not too far, a pair of Northbound Gray whales were also sighted. We sighted spouts, backs and flukes! We found more Common dolphins on our way home.
During the afternoon trip, we had a great time too! We sighted Common dolphins to the south, off of Point Loma! They were scattered all around us. We just found a nice aggregation when a spout was sighted to the horizon! We found a Humpback whale! It was traveling to the NW. It seemed to be pretty mellow, but out of nowhere it tail-lobbed! We watched and learned about how cool Humpbacks are and caught up with some Common dolphins! There were roughly 200 Common dolphins all around and on also seen on our way back home!
Overall, an incredible day spent on the ocean! Join us soon!
Trash/Recyclables: ZERO!
-Vanessa