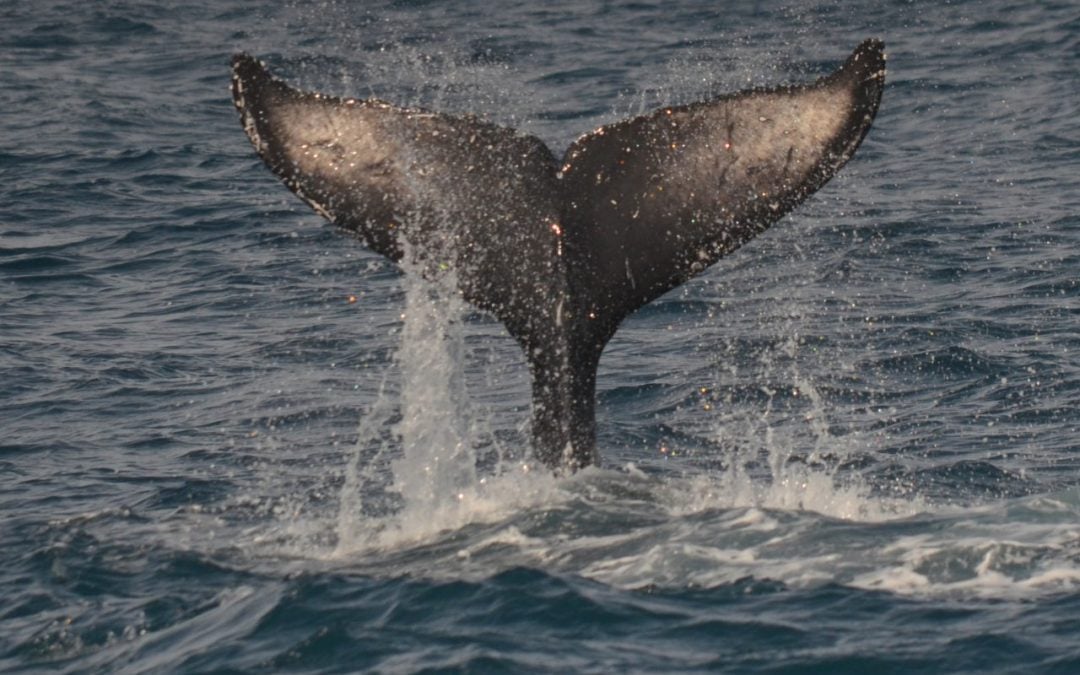 We were rockin’ and rolling out on the Pacific today! We enjoyed some fun swells that kept us alert and on our toes. We sighted both baleen whales and toothed whales on our trips today. During the morning, we searched out to the NW, and once we reached almost 8-miles from shore we turned to the SE. We sighted a juvenile Mako shark that was was headed north. We found ourselves off Sunset Cliffs and were surrounded by ~100 Common dolphins! Their inquisitive nature led them straight to us. A few cow/calf pairs were also sighted among the pod. A pair of Northbound Gray whales were also sighted! It was a Gray whale mother escorting her calf toward the coast, and led us home. We enjoyed watching the Gray whales playing with Common dolphins.We observed double spouts, and a couple of tail-slaps.
During the afternoon trip, we set our course to the north and sighted a huge scattered pod of ~200 Common dolphins near some diving birds. We watched them race to the bow and surf in our wake. A couple cow/calf pairs were also sighted in the mix. We left the pod and only traveled for 10-min when we got a report of a spout in the same location we were at. We ended up finding a juvenile Humpback whale! It was mainly traveling north, but unexpectedly began tail-lobbing! It would pick up its tail and slam it onto the ocean surface, not once, twice, but so many times, we lost count! We continued home enjoying the sights!
Overall, it was an incredible day whale watching! Join us soon, before the Gray whale season is up, which is typically in April.
Trash/Recyclables: ZERO!
-Vanessa