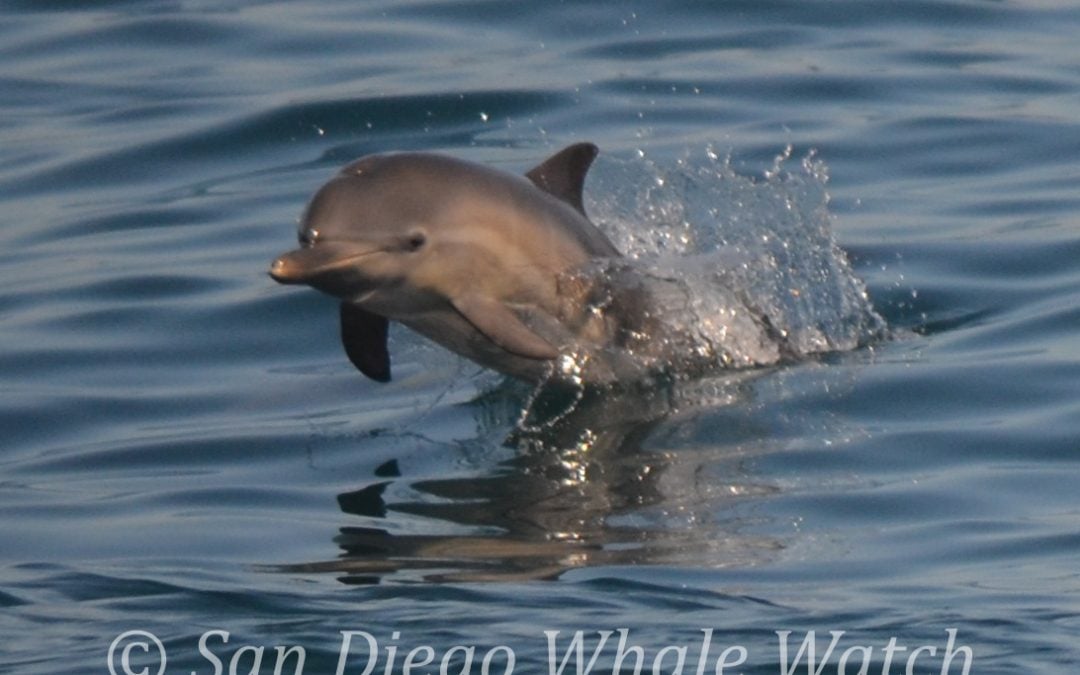 We are at the whale tail’s end of the Gray whale migration, here in San Diego! Come out soon, as we are still seeing Gray whales on almost every trip! During the morning trip, we set out and up near La Jolla, we had our first encounter. We observed a nice pod of ~200 Common dolphins that were cruising to the south. We approached and sure enough, they zoomed over to interact with us. We got to see porpoising, and surfing behaviors. A few cow/calf pairs were also seen traveling next to their mothers. We followed them to the south, and sighted a pair of Gray whales that happened to be mother and calf! They were headed north on their migration. The mother had big spouts, and the calf popped its head up high out of the water on almost every surfacing.
During the afternoon cruise, we had just as much fun! To greet us at the Mission Bay jetties, we sighted a trio of Inshore Bottlenose dolphins that were eager to bow-ride! We set out to the west, and after searching for a while, we sighted two prominent spouts on the horizon! Once within close range, we could see their heads and backs! We noticed some inconsistent dive times and zig zagging among the pair, but all was explained when FOUR Gray whales surfaced for breaths! They were seen traveling side-by-side and up to the north. The two pairs must have joined up to create one large pod right before our eyes. They seemed to be booking up the coast, but felt comfortable enough to get closer and check us out. We observed raised flukes a few times which was the highlight of our sighting! We continued on and while headed back toward the coast, another spout was sighted, but the whale was never relocated with our allotted time. Surprisingly, we did not find any other toothed whales along the way.
Overall, the day was beautiful and full of whales! We hope you join us on our next adventure out to sea.
Trash/Recyclables: TWO Mylar balloons, and a pair of latex balloons.
-Vanessa