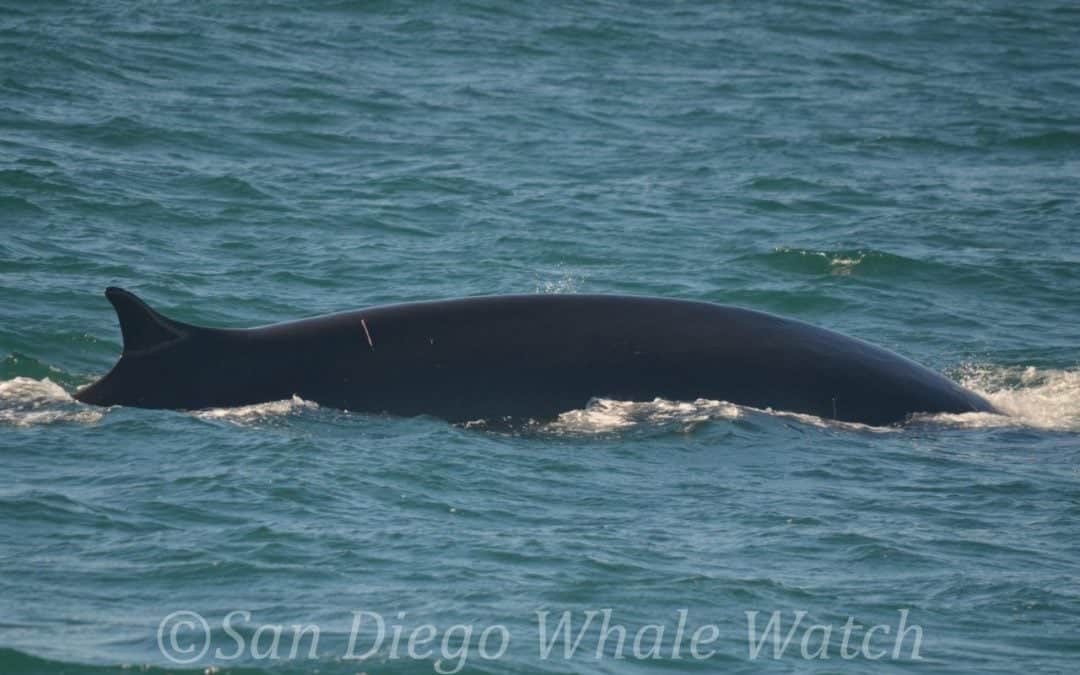 Super Cetacean Saturday is here once again! We encountered a Fin whale and Common dolphins on both of our trips today! We haven’t seen a Fin whale in months, so we were ecstatic when sighted. Fin whales are a cosmopolitan species, and can be seen anytime here in San Diego, just usually further from shore, in deeper water. During the morning trip, we traveled ~14-miles from Mission Bay to find the Fin whale! We got to see it twice as it had some longer dive times, roughly 7- to 10-min. Our final look was the best, as it surfaced near us, arched its back and went for a dive. To top it off, on our way out, we sighted scattered pods of Common dolphins. Some came over to check us out. On our way back in, more Common dolphins were sighted, including a huge feeding frenzy! We could see many birds diving into the water. Common dolphins were corralling the bait fish in a nice tight ball, allowing all wildlife to forage on the same food source. During the afternoon trip, we set out to the NW and found more Common dolphins. There were scattered all around, with birds diving into the water in certain aggregated areas. We continued on and found a nice pod of ~50 Common dolphins that were traveling primarily to the SW. They occasionally circled around and chased fish. Luckily, they were interested in us and zoomed around the vessel. We saw plenty of dolphins surfing in our wake. They lined up, side-by-side to enjoy the surf. Many bow-rode the Privateer. A couple of cow/calf pairs were also sighted. We got to our furthest point from Mission Bay, at ~13.5-miles and began to turn around. Fortunately for us, as we did, Captain Cristin sighted a tall, columnar spout! A Fin whale had been sighted and was headed toward us. We could see it turn in a tight circle as it went down, indicating it was likely feeding. We observed it a couple more times, and again the last sighted was the best! It was observed pretty close to us, us as it went for a deep dive. Overall, the day was spectacular! We hope you join us tomorrow for another full day of whale watching! Trash/Recyclables: One bundle of ~10 Mylar balloons and a single Mylar balloon successfully retrieved! -Vanessa