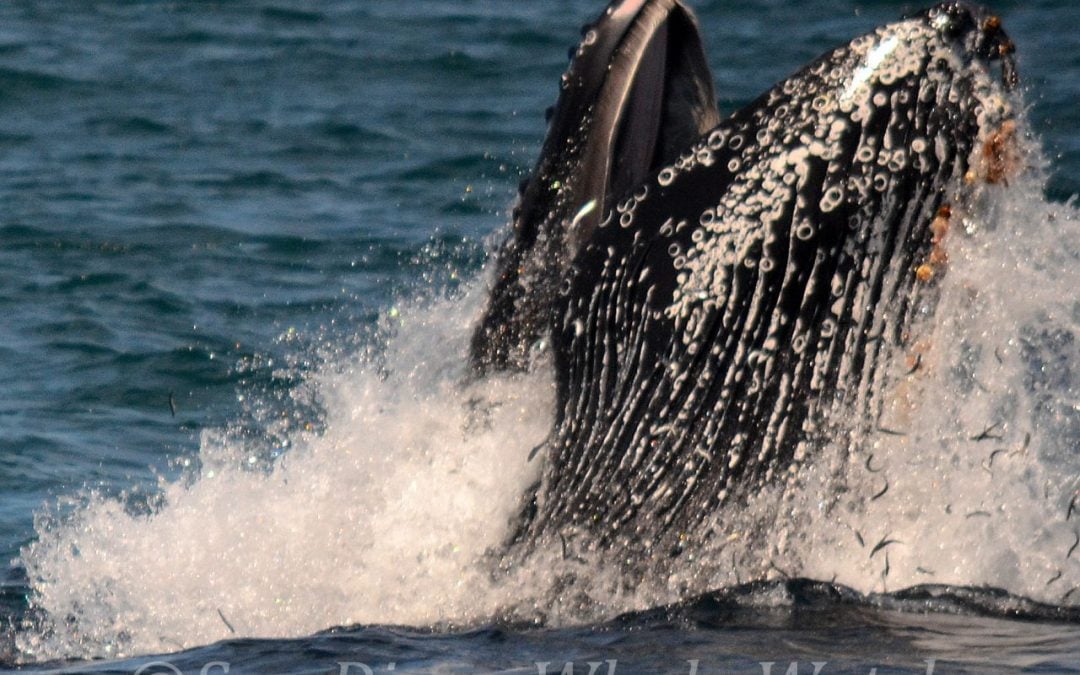 Where do we even begin?! Today was SPECTACULAR! Common Dolphins were in high abundance and we spotted FOUR SPECIES of baleen whale! On the morning trip, we passed through numerous small pods of Common Dolphins until we caught up with a pair of northbound Gray Whales! The two whales traveled slowly together as we observed their movement toward Alaska. Further to the west, Snowflake (confirmed by our drone photographer and partner, Domenic) the Humpback Whale made a brief appearance! On our return toward Mission Bay, we noted THREE additional whales that we did not have much time to observe. The first was an adult Humpback Whale, the second was a feeding Minke Whale and the third was potentially our second BLUE WHALE of the season. Unfortunately, no whale watching boats were able to confirm the species, due to our time constraints. Throughout the trip, we estimated a total of 350 dolphins. A feeding frenzy full of Common Dolphins, California Sea Lions, sea birds and a lunging feeding Humpback Whale stole our attention this afternoon! Up to ~700 Common Dolphins were seen circling the area in which one humpback continuously lunged through massive balls of anchovy! Few passengers were lucky enough to be looking at the right place at the right time when the whale BREACHED directly behind us after we waved goodbye to it. It would have been very difficult to top that experience but we were happy to find a trio of Inshore Bottlenose Dolphins upon our return to the Mission Bay channel! With such incredible sightings today, we’re very eager to find out what the ocean has in store for us tomorrow. See you then, whale watchers! Trash/recyclables: ZERO!