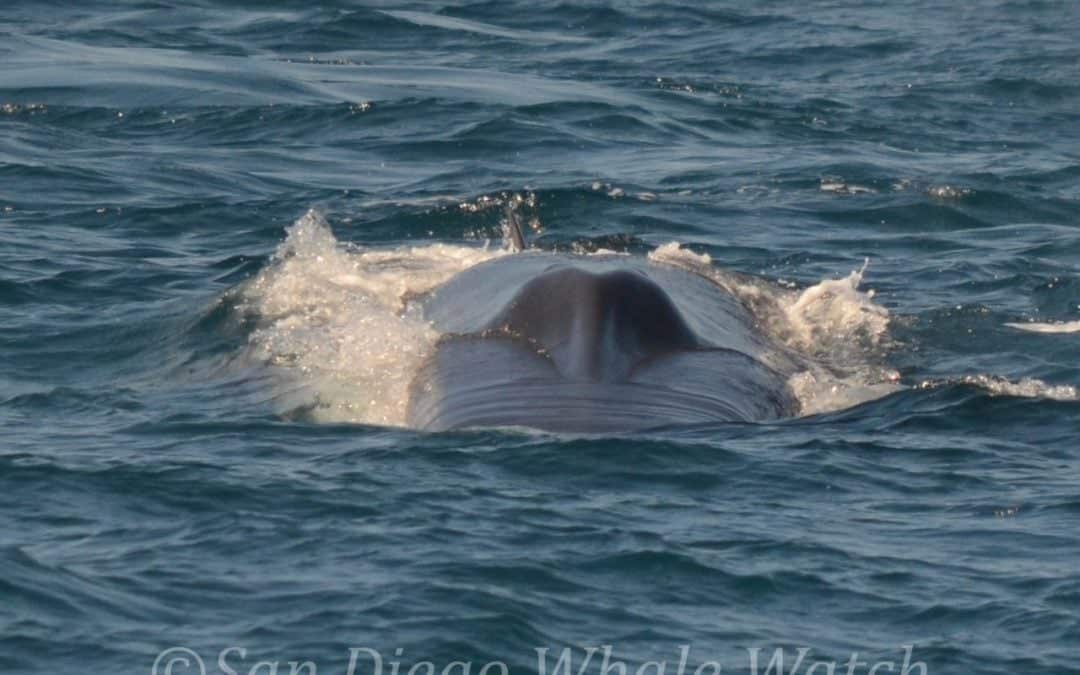 The second largest whale in the world, the Fin whale stole our hearts today! We were so lucky in finding Fin whales on both trips! During the morning trip, we journeyed west toward deeper water. Once we reached the drop-off a pod of ~30 Common dolphins were sighted traveling south. This included a nursery pod with many cow/calf pairs sighted. We continued on as we had a baleen whale in the area! We found our first Fin whale of the day. It popped up away from us on the first two surfacings. While waiting for it, five Offshore Bottlenose dolphins appeared out of nowhere! They came to check us out, went for a dive and then were gone! A juvenile Guadalupe fur seal was also sighted! It was resting at the surface, and then eventually moved on, but still hung out beside us. Then to our great surprise, the Fin whale surfaced right next to us! The massive release of its breath, exhibiting a spout, was extremely loud and so powerful! We watched it surface several times before its big, sounding dive. We continued home and sighted more Common dolphins along the way!
During the afternoon trip, we set out to the same whale hotspot zone! We were hoping for similar wildlife activity! We got lucky and at first sighted a spout from a large baleen whale. We waited and ended up seeing two Fin whales surface! They started headed straight for us. We could see their splashguard, blowholes, streamlined bodies, and the dorsal fin. They went for a dive right underneath our boat! They had ~10-min dive times. Upon surfacing, a third Fin whale had joined them! They were all within 1/4 body length of each other, kind of forming a triangle. We could see them moving toward the SE. As they traveled toward the coast, they began to line up and were side-by-side. There was a smaller individual, likely a subadult/juvenile.We hung out for a couple more views, getting great looks at their coloration. We could even see their asymmetrical lower jaw. The right side is white!
Overall, it was an awesome day! Come on out, we hope to find more Fin whales, and crossing fingers for Blues!
Trash/Recyclables: ONE Mylar balloon successfully retrieved!
-Vanessa