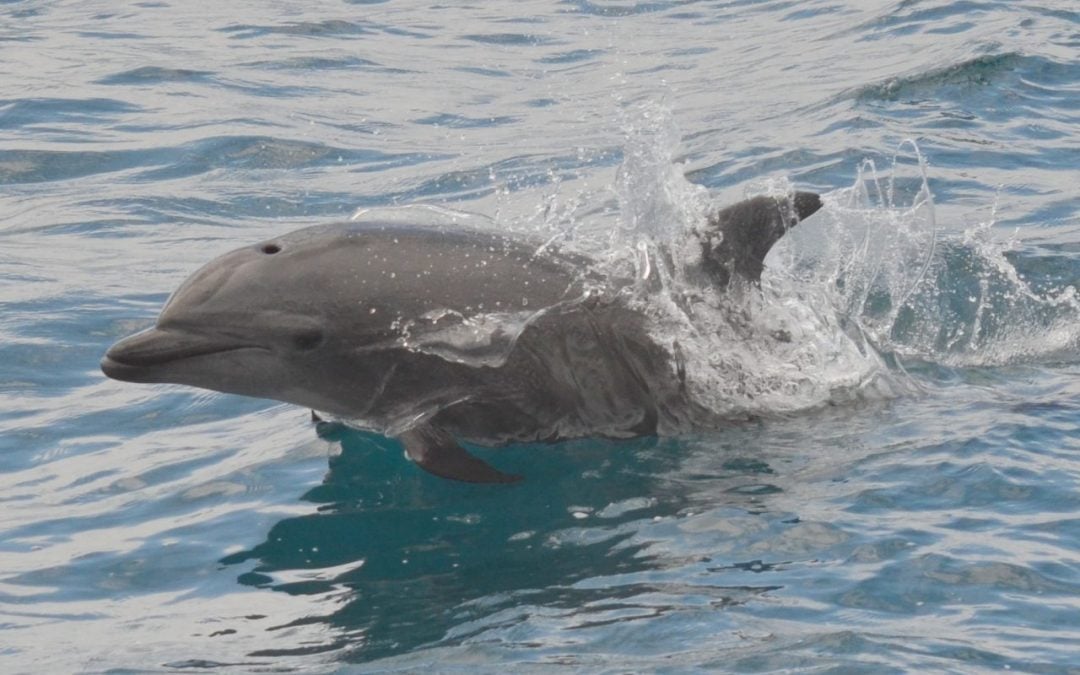 We have become huge Fin whale fans! They are so amazing to see in all their massiveness! We had two great trips with Fin whales sighted on both. We had a great start to our morning trip, with a feeding frenzy of a variety of seabirds and Common dolphins! Some took some time to check us out and bow ride! We continued out to the west, and found a spout! We located one Fin whale circling the area, which means it was in feeding mode. With every deep dive, we could see its back arch and see its great size! We ventured to the north, and sighted our second Fin whale for the day! We got our best looks as it popped up right in front of us. We pointed our nose toward the coast, and along the way found an awesome pod of ~100 Short-beaked Common dolphins! They were very surface active, often leaping out of the water, porpoising, breaching and tail-slapping.
We were just as lucky during the afternoon trip in sighting Fin whales again! We just passed the drop-off and spouts and splashes were sighted. We had TWO Fin whales roaming the area. Circling movements were observed indicating more feeding behavior. While waiting for them to surface, we found a big pod of ~60 Offshore Bottlenose dolphins! They were exciting to watch as they came over to check us out! Some acrobatic individuals porpoised beside and were also surfing in our wake. We could see them at the bow too! They continued to the SW, as we went back to enjoy more Fin whale action. One of our best and last looks, a single Fin whale popped up right beside us within 100-ft away! A clear indication of curiosity! It swam behind us and to the SW. It aint a bad day when you get mugged by a Fin whale, the second largest whale in the world!
Trash/Recyclables: ZERO!
Join us tomorrow, as we search for more Fin whale activity!
-Vanessa