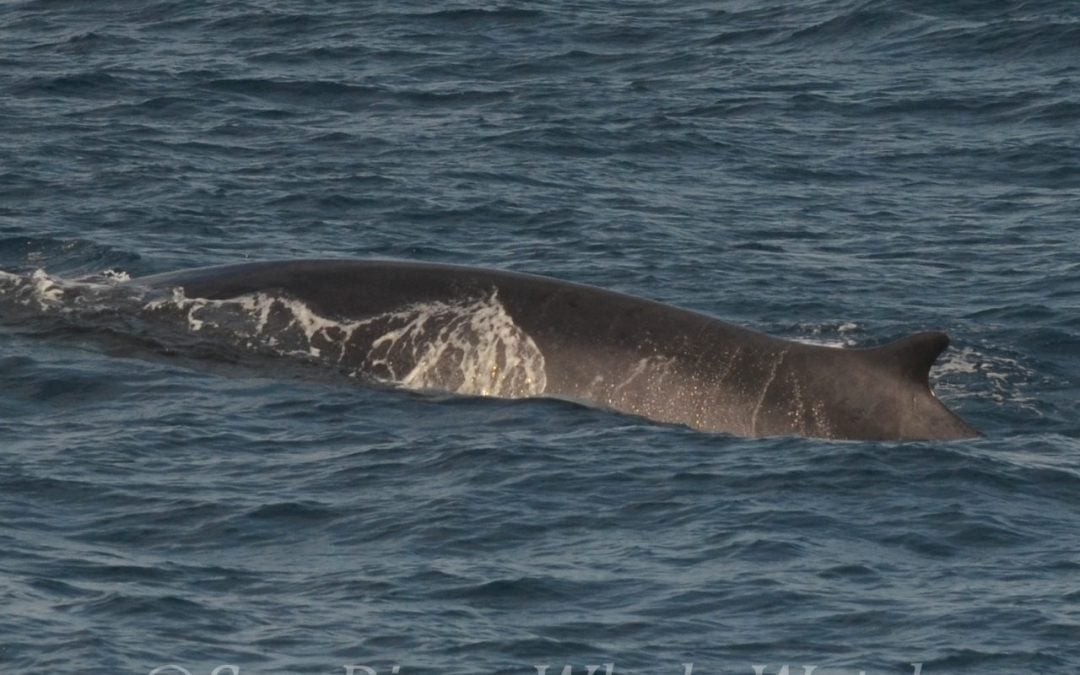 Whale Watching in San Diego is where its at! We had an incredible day observing both baleen whales and toothed whales out in the Pacific ocean. During both trips, we sighted multiple Fin whales, the second largest whale in the world! During the morning trip, we set out to the west, and along the way, found scattered small pods of Common dolphins. Some came over to bow-ride! We continued on, and after reaching the drop-off a single Fin whale popped up in front of us! We got a couple great looks before more spouts were sighted further west. We caught up with them, and counted FOUR Fin whales in total! They seemed to synchronize their surface time, as we could see them spread out around us. We got great looks as they came up for multiple breaths, before going down for a deep dive. On our way back home, we found an awesome pod of ~100 Common dolphins that were eager to catch up with us! Cow/calf pairs were seen swimming right next to us!
During the afternoon trip, we had our first sighting of two inshore Bottlenose dolphins. They surfaced right in front of us at the mouth of the Mission Bay jetties. We zoomed out to deeper water and found more scatted Common dolphins near the drop-off. We made it to 10-miles from shore and found our first spout! It was tall, columnar and around 20-ft high! We had FOUR Fin whales in the area! They all popped up, one right after the other! To top it off, there was a cow/calf pair among them! The calf was sticking close to mom and another adult! The trio, gave us incredible looks! They were very inquisitive and would surface within 15-25-ft away from us! A fluke print appeared out of nowhere within 10-ft away from the boat, which indicated they dove underneath us!
We had a trip of a lifetime! Join us before these majestic Fin whales move on!
Trash/Recyclables: ONE Mylar balloon successfully retrieved!
-Vanessa