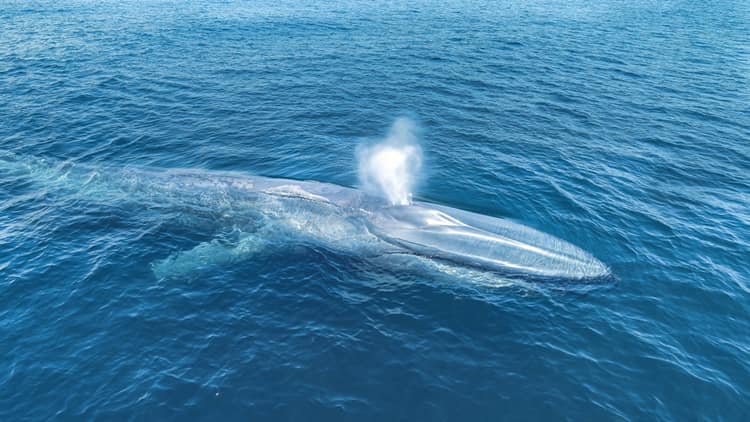 Blue whale season is still in full swing here in San Diego! We sighted multiple Blue whales, hundreds of Common dolphins and some fun feeding frenzies throughout the day! During the morning, we zoomed out to the drop-off and sighted a pod of Common dolphins that were eager to check us out! They surrounded the whole boat as they surfed in our wake and bow-rode. We continued out to the SW and sighted a spout in front of us! We got some great looks at a Blue whale as it came up for a breath. Two more graced us with their presence! We got to see their spouts, backs, and the big arch as they went down for deep dives. We waved goodbye and started the 11-mile journey home. Along the way we found another acrobatic pod of Common dolphins!

During the afternoon, our plan was to head out to the same spot, but as soon we got to the drop-off, two Blue whales surfaced pretty close to us! It surfaced for 6-7 breaths and went down for a sounding dive. Common dolphins were seen out in the distance. The Blue whale was long-winded but surfaced one more time! While waiting for the Blue to surface again, we found Common dolphins everywhere, totaling close to 500! We began to head up to the north and spotted the Blue whale again! It was only half a mile from where we last sighted it. It popped up behind us once again and we watched it go for an arching dive. We found more Common dolphins along the way home.

Overall, it was an amazing day out there! Join us tomorrow for another great adventure on the water!