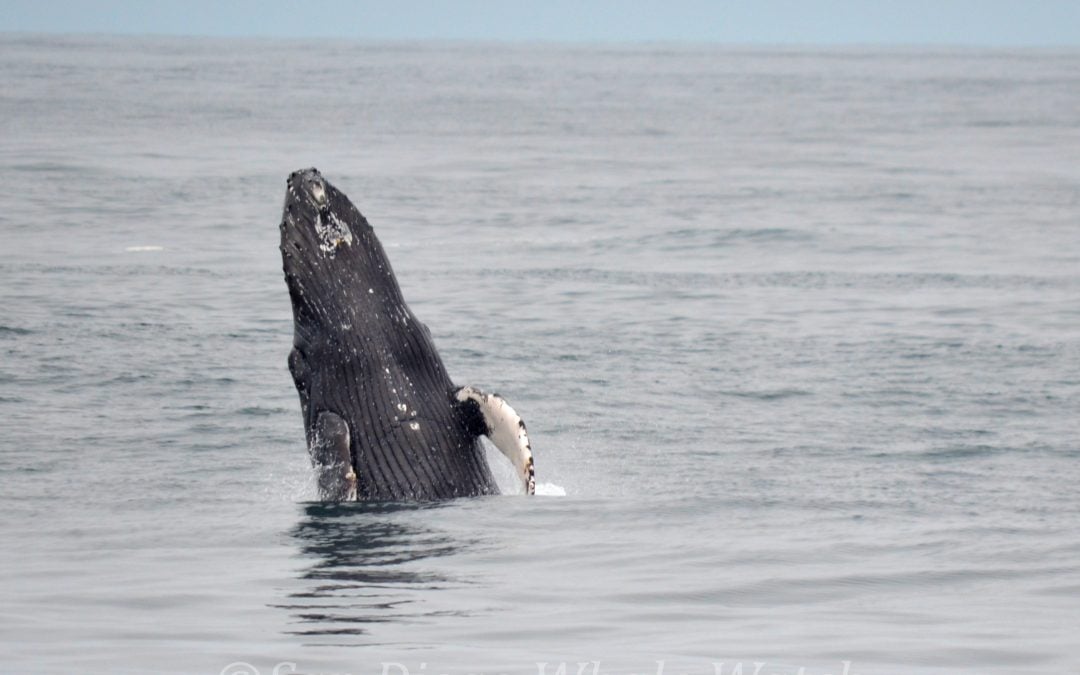 Every time we go out to the Pacific, we never know what we will encounter which makes whale watching so much fun! During the morning trip, we headed west and found the same juvenile humpback we have been seeing for a couple months now. We have unoffically named it “Twitch” due to its unpredictable acrobatic behavior. The humpback proved to passengers how it earned its name by breaching four times! Two of those breaches was within close range. We observed its flukes on every deep dive! We watched it travel to the south at a steady pace. We observed Common dolphins out on the drop-off. They were incredible! They raced to the bow and surfed in the wake. Many cow/calf pairs were sighted all around.
During the afternoon cruise, we set out to the west, and along the way, we sighted a small pod of ~20 Common dolphins! They were headed to the south, but stopped to spend time with us. We continued on and went to the SW. Outside the drop-off, we encountered a Blue whale! It was circling in one area, which indicated it was feeding! We observed its massive 25-ft spout as it came up for 6-7 breaths each time. It was relatively a short diver, as it went down for 10-15 minute dives. We observed one view of the flukes, but the rest of the time it did a massive arch and sunk down. On our way home, we sighted a larger pod of ~75 Common dolphins that were zooming to the south. We enjoyed watching them up close as they checked us out. We sighted a pod of ~10 Inshore Bottlenose dolphins near the Mission Bay jetties. They were circling around and likely were feeding. Some came to bow-ride and surf in our wake.
Trash/Recyclables: ZERO!!!
It was an amazing day! Come on out for a great adventure on the Pacific.
Naturalist,Vanessa