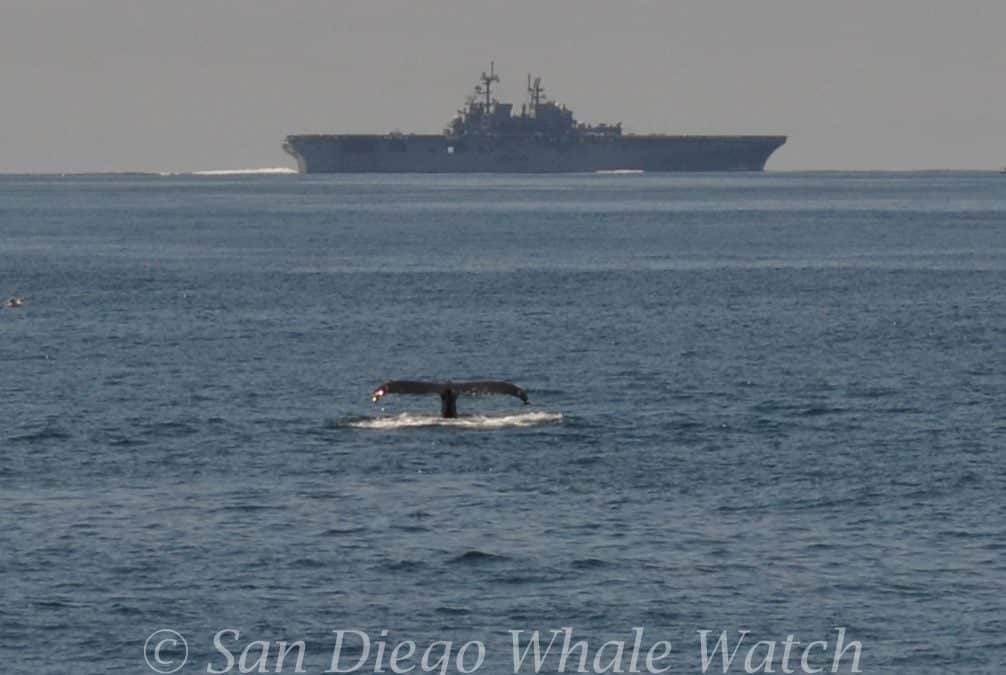 We beat the Monday Blues with blue skies, Common dolphins, and our friend, “Twitch” a juvenile Humpback whale. We had non-stop activity as soon as we exited the Mission Bay jetties! We got to observe a spread out pod of ~75 Common dolphins in a feeding frenzy. They were seen swimming upside down, chasing fish. Many species of birds were diving in the same areas. We continued out to the SW and just beyond the drop-off, we found another huge pod of ~400 Common dolphins and “Twitch”, the juvenile Humpback whale! We watched the Common dolphins race straight for our boat! They bow-rode and surfed in our wake. Lots of babies were seen all around. We sighted many acrobatic behaviors, as the Common dolphins porpoised, breached and tail-slapped. The humpback would pop up inside the pod of Common dolphins, and then also follow close behind. We even observed a couple Common dolphins attempting to bow-ride Twitch’s head! We observed Twitch surface for numerous breaths as it fell into a nice steady travel mode, headed up to the north. We got to see countless spouts, backs, and sounding dives to include raised flukes.
Trash/Recyclables: ZERO!!
It was an awesome day! Come join us soon! We have been experiencing some nice, calm sea conditions too!
Naturalist,Vanessa