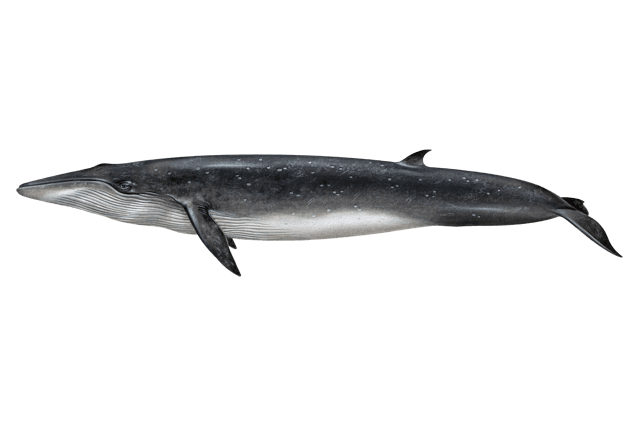 Found in warm temperate oceans including the Atlantic, Indian, and Pacific.

Bryde’s whales (pronounced “Broo-tus”) are a medium-sized species of baleen whale that are predominantly slate-grey in coloration with a lighter underside. Although they can be difficult to distinguish from Fin Whales and Sei Whales, Bryde’s Whales have 3 distinct ridges on their rostrum that are unique to the species.

Bryde’s whales were once considered a singular species; however, recent studies have shown that there are two sub-species of Bryde’s: The Bryde’s/Eden’s Whale (Balaenoptera edeni edeni) is a smaller form, found in the Indian and Western Pacific Oceans, typically in coastal waters. The second form, the Bryde’s Whale (Balaenoptera edeni bredei) is considerably larger and often found in pelagic waters.

They are members of the rorqual whale family, a grouping that also includes Humpback Whales, Blue Whales and Minke Whales. Along their undersides, Bryde’s Whales have 40-70 ventral throat pleats that stretch from their lower jaw all the way down to the navel region. When feeding, these throat pleats allow the animal to “balloon out” and engulf vast amounts of water and prey. Bryde’s Whales feast on a number of prey items including krill, copepods, red crabs, shrimp, and a variety of small schooling fishes. It is thought that Bryde’s whales can consume anywhere from 1,320 to 1,450 pounds (598-657 kg) of food each day!